The Religion of the People
Like most of the other countries of South East Asia, Cambodia remains predominately Buddhist. Buddhism is part of their cultural identity, yet its ritualism is mixed with animism (the belief in and manipulation of demon spirits). The Cambodian lives in fear of these ancestor and territorial spirits, seeking to manipulate them for the benefit of his health, wealth, and security. 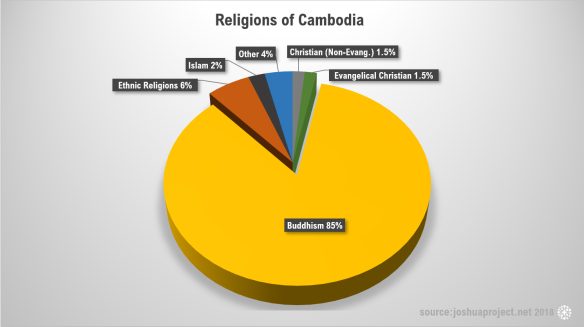 Since the early 1990’s Cambodia has been relatively open to Christian missionaries and tolerates evangelism and public worship.1 The church has experienced rapid growth in the last 20 years, yet it still remains a small percentage of the population. There are still today 8-11 thousand villages without a church or gospel witness.2 Please pray for spread of Christ’s fame in this needy land.

The Growth & Challenges of Christianity
In the 1990’s and into the 2000’s many were open to hearing the messages of the gospel and the evangelical church experienced rapid growth. But with the growth came several challenges.

1. Doctrinal Error and Confusion. Cambodia has been infiltrated by American cults such as the Mormons and the Jehovah’s Witness as well as other “Christian-like” cults from China and Korea. Pray for God’s people to practice discernment and reject the error of these wolves.

2. The Prosperity Gospel.  One of the major problems all throughout poorer countries of Asia is the propagation of the “health and wealth” gospel resulting in “Rice Christianity. A Rice Christian is simply someone who professes Christ for the purpose of material gain. Many Cambodian church buildings were at one time filled with people who professed Christ but “feel away” as soon as they stopped receiving free food, medical treatment, English lessons, or even money  (cf. John 6:26-27). One missionary put it this way, “My experience in Cambodia after 14 years is that the number of churches that actually believe, live and preach the Gospel are few. The church here has largely been built upon handouts, aid, and the prosperity gospel. What Cambodia needs is an infusion of the true Gospel of Jesus Christ into the many little assemblies that have popped up all over the land. Only soundly converted believers can lay the foundation of the Gospel in villages where it is not yet laid!” Please pray for the true cross-shaped Gospel to be proclaimed in Cambodia and that Christ might sanctify His bride through His truth.

3. Dependency on Foreign Funds: The majority of national pastors in Cambodia are financially supported with foreign funds, creating a host of problems within the Khmer church. As one missionary writes, “So much awesome Great Commission work has been done and is being done in Cambodia. Yet, from my long-term observations, an ample amount of those doing missions—to varying degrees—have recreated the state of lethargy and dependence…. Dependency is like a spider with many far-reaching tentacles, creating all sorts of “life-sucking” problems…. church planting movements do not rise up out of this dysfunction.”5 Another former missionary , Don Cormack makes a similar observation in his classic history of the Cambodian Church, “This patronage syndrome, so entrenched throughout Khmer social, political and military culture, was to become a fundamental weakness in the Cambodian church, stunting its true indigenous growth, distorting its perception of Christian discipleship and service; exposing it to attack and ridicule, and endlessly dividing it by creating all manner of jealousies and misunderstandings within the community of believers.”6 Of course the Sovereign King will continue to build His kingdom in Cambodia despite the way foreign money hinders it, but pray for national pastors, missionaries, and foreign donors to take seriously the stewardship of the gospel by humbly seeking God’s wisdom about these matters and make informed decisions concerning their role in advancing the Kingdom.